Gulf Coast Daylilies:  As Local As it Gets

Hello!  I am Everett Crainer.  I am a native of Brazoria County, which is located on the Texas Gulf Coast. It was Inez Tarrant who encouraged me to use “Gulf Coast” in naming the cultivars I have registered.  She said she always regretted never using Gulf Coast herself.  Everyone who knew, respected and loved her still miss her contributions to daylilies.

Have you ever noticed how the best advice comes from fellow daylily gardeners?  That’s why we like to pass along great advice we’ve learned on our own.  Lesson learned: work with daylily parent plants who thrive in your climate. I wish I would have taken this advice sooner — it would have saved me lots of time and money.

Everybody likes to get a new car.  But what really gets a gardeners’s heart beating and eyes popping are new daylily plants.  What do I look for?  Just what you would—lots of flowers with well-branched hardy scapes and fantastic foliage that can take what our fickle weather without a lot of extra effort on our part.

When I began my hybridizing program, I had no rhyme or reason for my first crosses-- just producing many, many seeds.  It took six years to register my first acceptable plants.

If the flower catches my eye, I observe the bud count, branching, substance, and watch for rebloom. In my flower observation, I look for consistency: whether a flower looks the same each time it blooms.  I also observe the foliage.  Then I closely observe the scapes.  I prefer plants to have scapes that produce flowers above the foliage.  We like them to be tall enough to stand up and smile at you.  If the cultivar does not meet my standards, it goes to the compost pile.

***Keeping on top of what other growers are doing in your area is one way to figure out if you have something unique.

My hybridizing program always hangs in the balance. For me, it is an ongoing project.  The biggest question is always, who is still alive at the beginning and ending of each bloom season?  Hybridizing is a roll of the dice, but one that is very well worth it for this Gulf Coast hybridizer.

Did you know that daylily gardeners are happier people?  We have more energy and zest for life waiting for the new bloom season.  You’ve got dreams waiting to be lived!   You’re probably not surprised, are you? 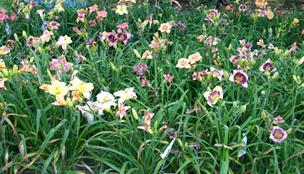